A rocket trapped in a prison of views 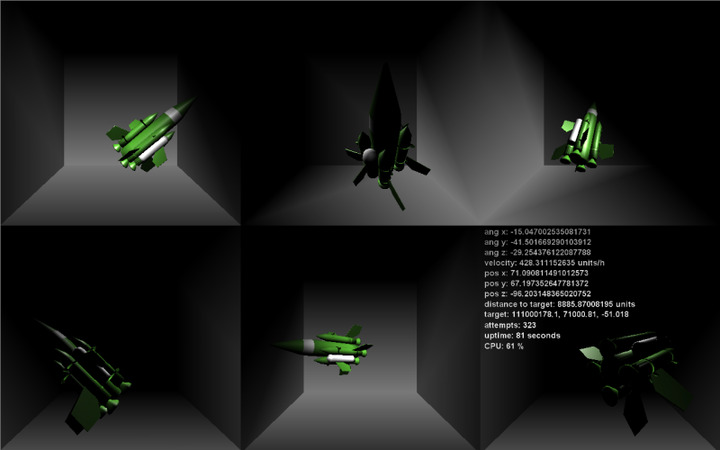 Trapped Rocket is a 4.9Mb work of software involving a simple simulation of a guided missile, trapped between 3 pairs of opposing views (a cube) while trying to reach its programmed target. The target is a static point in Euclidean space, unseen and outside the prison. Each time the rocket attempts to reach its target it strikes a camera (wall) and changes its course looking for another trajectory of escape. It will do this forever, never escaping, until the program is stopped.

Each attempt is counted as is the processor load on the host system. This along with other data are displayed in one of the six panels.

This piece is designed for uninterrupted execution on a computer with capable 3D graphics card output to a large screen for the duration of the exhibition.

This work is inspired by some ideas expressed in Paul Virilio’s text, The Vision Machine.

The software may execute on a modern 3D-capable Linux system and play continuously, or it may not. This work was made a long time ago.

This project was made with Blender and Python.