The future of war, heard through its past. 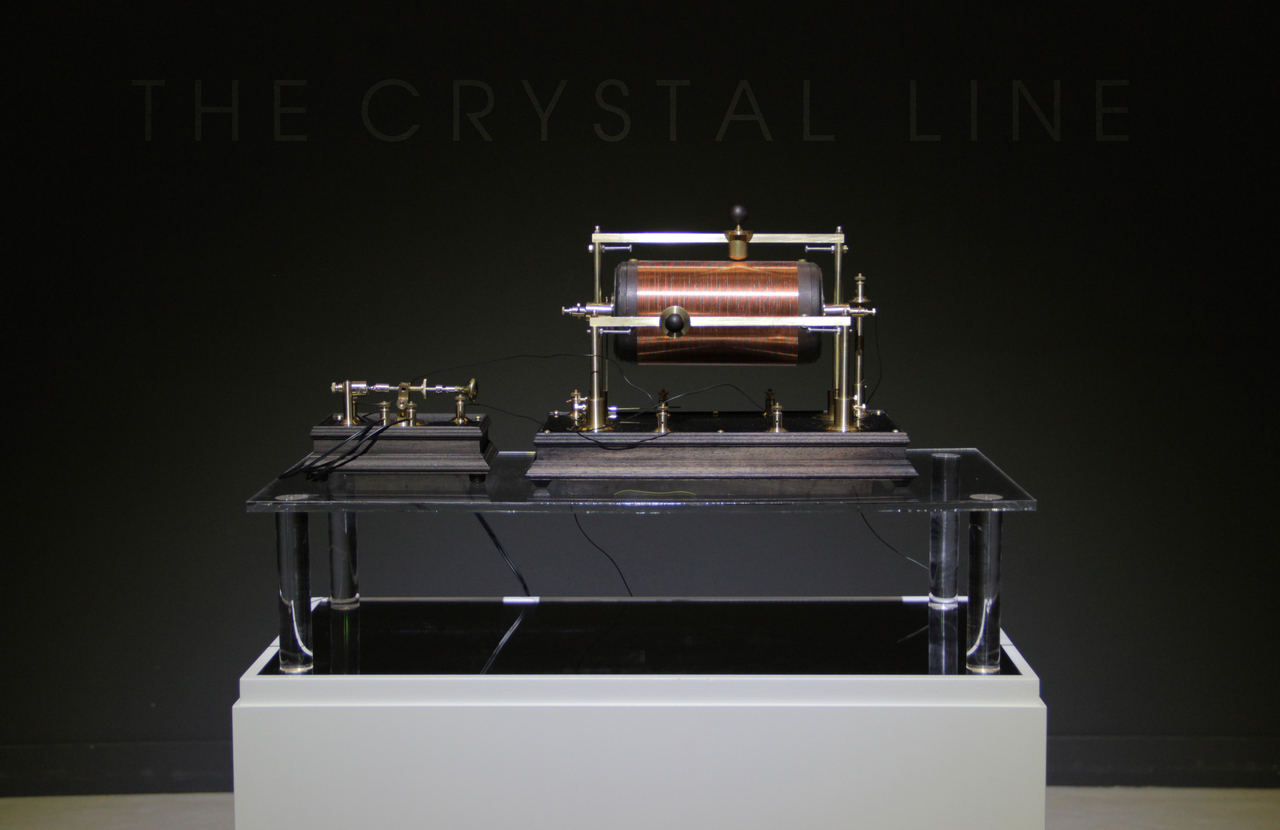 The advent of radio communications revolutionised war, removing the need for human and animal messengers and gave commanders near-instantaneous, long-range control of troops.

The new crystal radios possessed an almost magical quality, channelling electromagnetic phenomena in the air directly into electricity, without any need for power of their own. Today, all wireless communication descends from the crystal radio - from mobile phones to GPS and wireless networking.

The Crystal Line positions the crystal set at both the root and tip of this vast lineage. First, a small computer scours the World Wide Web for the latest developments in warfare and battlefield communications technology which is then passed to a text-to-speech engine and spoken in the manner of an English radio broadcaster. This spoken text is then transmitted as an AM broadcast, which when captured by the set inherits audio properties and textures unique to the medium; heard just as men in the trenches would have heard them a century ago.

This project was commissioned by The Cutting Room and Phoenix, celebrating the centenary of World War One.

The advent of radio enabled near instantaneous transfer of commands and information on the battlefield and in doing so, radio literally changed the temporality of war. This new domain of high-level strategic and organisational abstraction soon ushered deep dependence on signal intelligence and encryption; tools and techniques for encapsulating, detecting and interpreting information within the radio spectrum.

Signalling aside, radio also had an impact on the way military ambition understood and operated upon geography. Command could suddenly reach far into the air and sea from static posts. Soon after came the locative technology of global positioning systems (GPS), which in turn enabled missile guidance and ultimately the nuclear arms race.

Radio, one can safely say, has had a vast impact on the shape of our world today.

Perhaps also not mentioned enough is the cultural and emotional impact radio had upon troops, (men) who were often isolated for long periods in a very significant and difficult time in their lives. Simply being able to tune into music or hear the news back home was vital to the morale of soldiers.

Many images of early radios in WW1 show soldiers huddling around a crystal set as though it were a fire. For many, music from a crystal set was the last music they heard.

The Crystal Line harnesses some of these tensions, casting a line of inheritance all the way to the present. Through the room’s speakers we hear a synthetic voice in the accent of an English gentleman deliver what has become the bleak and bleeding legacy of Cybernetics; a landscape rationalised, contained and physically transformed by network topologies, cognitive science (AI, vision systems), servos and explosives. This is Truman’s dream of a ‘closed world’ wrapped in a skin of sensors. Further, it is the story of how ancient Euclidean and Platonic models - mathematical abstractions of points and lines - have enabled a geo-strategic control interface over our complex world.

It was my intention to give Phoenix the most beautiful crystal set possible and one true to the era. This is something I most certainly couldn’t have done without the help of master craftsman and radio expert Geoff Roberts.

Working with the below set as inspiration, Geoff crafted the set in his Birmingham studio. Rather than using modern methods (CNCing, 3D printing), all brass components were turned on a traditional metalworking lathe.

The web crawler code itself is very simple, leveraging Scrapy. There are many similar to the one below, used for each site as they all have particular HTML parsing needs:

The code is run like so, outputting to a CSV file: